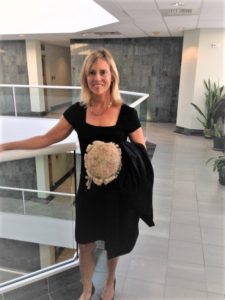 Juliana Snelling (maiden name Horseman), is a Rhodes Scholar, a Director of Canterbury Law Limited, a member of the Bar of England & Wales, the Law Society of England & Wales (Solicitor), and the Bermuda Bar (Barrister & Attorney).

She also represents clients (both claimants and defendants) in a whole range of civil litigation disputes in the Supreme Court of Bermuda including employment/labour, tort (including negligence), judicial review, public law, human rights, property (including landlord and tenant, partition and constructive trust disputes), defamation, debt, and personal injury matters.

On March 1st, 2012, she co-founded and manages the law firm of Canterbury Law Limited with fellow director Mr. Paul Harshaw. The firm is the proud employer of nine Bermudians and has trained many young Bermudians in the practice of law.

As published in Bermuda’s daily newspaper The Royal Gazette in 2019:

The 2018 edition of Who’s Who Legal Labour & Employment wrote:

“Juliana Snelling stands apart as the top labour and employment lawyer in Bermuda, according to our research, thanks to her comprehensive understanding of the area.”

“Juliana Snelling is one of the foremost employment lawyers in Bermuda and is recognized as a formidable litigator and disputes expert.”

In 2015 Ms. Snelling won a “Best of Bermuda Award” in The Bermudian Magazine for being Bermuda’s Most Tenacious Lawyer.

In 2012 she was the winner of The Bermudian  Magazine Award for legal services for being the “go to” lawyer for employment and immigration representation.

In 2011, Ms. Snelling was recognized by the Bermuda Government’s Department of Human Affairs as one of the 100 Women honorees, an award that highlights the achievements of 100 women in Bermuda who have had a positive impact on Bermuda in the business sector.

Since January 2018 Ms. Snelling has been serving as Counsel on the Bermuda Medical Council, advising the governing medical body on legal issues affecting medical practitioners with a view to helping maintain high standards of practice of medicine on the Island.

She also founded and continues to manage two community-action initiatives:

(i) The Grateful Bread (2017), a group of ever-growing volunteers who feed and donate to the needy in Bermuda each month at a social celebration, bringing together residents from all racial and social sector backgrounds to help heal divisions in Bermuda society; and

(ii) SPS.bm (Support Public Schools, Bermuda) whose mission is to equip public school students with the educational supplies and instructional resources that they need for a better-quality education. In 2019 SPS.bm was selected by The Bermudian magazine as the 2019 winner of their Public and Service Award in the category of Company Community Project.

Ms. Snelling previously served for 3 years as Chair of Bermuda’s Land Valuation Appeal Tribunal, for several years as a member of the Professional Conduct Committee of the Bermuda Bar Association (helping to prosecute offending attorneys) and on the Treatment of Offenders’ Board in the Island’s prisons.

Delta Decisions Inc.
We use cookies to ensure that we give you the best experience on our website. If you continue to use this site we will assume that you are happy with it.Ok